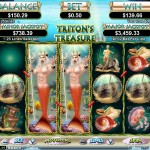 Triton’s Treasure is a 5 reel and 25 pay-line that comes from the trusty brand of Real Time Gaming (RTG). It is based on the story of the mythological ruler of the seas called Triton.

This slot gives players the chance to enter the underwater world governed by Triton and try to win a share of Triton’s very own treasure by working with his army of mermaids intent on helping the players to win their prizes. Symbols include Triton’s Palace, a treasure chest, clown, fish, octopus, shipwreck, blue crab, jellyfish, urn, shellfish and statues.

Triton’s Treasure is one of the more exciting slot games that bases its theme on Greek mythology. The expanding wild of King Triton and the Free Spins Bonus Round gives players big chances to win prizes. Players that have enjoyed playing WMS Gaming’s Kingdom of Titans and IGT’s Treasures of Troy will be firmly at home playing this slot.