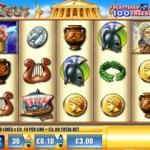 Zeus is a 5 reel, 30 pay-line slot game that has been developed by WMS Gaming and is based on the Greek mythological God of the same name. This game has a cartoon style to it and boasts an attractive layout.

Ancient Greek religion and mythology depicts Zeus as the “Father of the Gods and men” and his importance is echoed throughout this slot game. He is the focal point of this slot as he is in Greek mythology.

The audio and visual effects of Zeus do not fail to please and help to give a real divine atmosphere to the game. Symbols are all based Greek mythology including Zeus himself, the mythological horse Pegasus, a helmet, boat, vase, harp and wreath.

Zeus is slightly unique in the fact that it focuses purely on the free spins. Players are drawn in by the alluring temptation of having the chance to win up to 100 free spins. The fun and games begin when the player hits the lightning fist symbol. If the player hits three or more of these lightning fist symbols across the reels then this activates the Zeus Bonus Feature.

In addition to the free spins available in Zeus, the Zeus symbol and the Wild symbol are also stacked which is a real teaser for any player playing this game. The player is constantly driven by the desire to see these symbols fill up the reels and it is a motivation that keeps pulling the players in.

Zeus is a game that has long been popular. It is based on a popular theme with other games from WMS Gaming including Kronos, Kingdom of the Titans and Rome and Egypt following along similar lines in terms of themes and game play. It is also similar in its style to the Playtech title Gladiator and IGT’s Treasures of Troy.

Zeus is all about the free spins though. No other game offers the potential to win as many free spins purely from hitting five feature symbols in the way that Zeus does and that prospect is a genuine seduction for slots players looking for a massive win. The wins might not happen frequently on Zeus but when they do they are epic.

Zeus is the first in the series of zeus-themed slots, with Zeus 2 and 3 only available as a land-based slot machine at the moment. They are expected to be released online by WMS in the enar future.