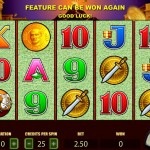 Pompeii is a slot game developed by Aristocrat that has long been a part of land-based casino culture. It is one of the most popular slot machines in casinos across the globe and is now making its transition to the online domain.

The game is a 5 reel, 243 ways to win slot game that has a theme based on the doomed city of Pompeii that was destroyed by the erupting volcano at Mount Vesuvius in AD 79. The slot game takes inspiration from this tragic tale to offer one of the most exhilarating slot games of recent times. The player is given the chance to uncover some hidden treasures that have long remained buried within the city.

Pompeii does bear a similarity with other games that hold an historic theme including Sun and Moon as well as the Queen of the Nile series but it does stand alone in its own right as a slot game that offers players an unrivalled playing experience.

The main bonus feature on Pompeii is the Free Spins Bonus Round. In this feature, players have the chance to gain 10, 15 or even 20 free spins with 3, 4 or 5 coins. There are wild multipliers included in the free spins feature so players can really tally up the winnings.

The game comes into its own when players do win prizes. To recreate the atmosphere witnessed in its final days, Pompeii sees the daunting Mount Vesuvius shake the screen when players win big. The Roman era is also encapsulated with a scatter symbol represented by a Roman coin of Julius Caesar with the words “Veni, Vidi, Vici” on it. Other symbols included in the game are a dolphin, chariot, helmet and Centurion armour. The volcano symbol represents the wild.

Pompeii’s main drawing point is its high volatility. Some players shy away from these type of slots because they can have very long mean streaks, but some players want to have the big win, which games like Pompeii offer. If you are new to slots it is probably advisable to approach Pompeii slot with a bit of caution and get used to it before raising your betting levels.

If you enjoy Pompeii then you may also like Tresures of Troy from IGT, which has a similar theme and offers some very nice wins from time to time.