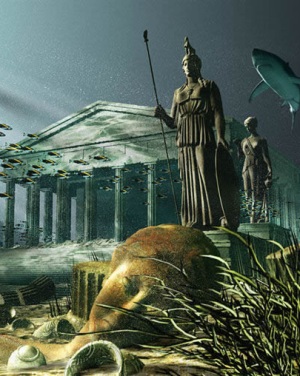 The use of Mythical places has not been a new thing in slot games, with many land based slot machines containing fragments of history. Those that have visited a casino in recent years will have stumbled upon the legendary Aristocrat slot Pompeii (which was released online) in 2012. Also the WMS slot Rome and Egypt combines two mythical places in one game, which is something players have enjoyed for years.

Mythical place slots online
With the success of many land based slots using mythical places at their theme it didn’t take long for online slot manufacturers to start applying this to new titles. Playtech came along with Atlantis Queen, focusing on the treasures of the lost city underwater. A similar slot was created by 3D slot developer Sheriff Gaming was simply called Atlantis. It features Pierre La Mer, a diver and explorer searching for hidden treasures in the depths of the city swallowed by the tide. There are also slots that made their name offline before becoming popular in their own right online. A good example would be IGT’s Treasures of Troy, which has proven just as popular on the internet as it has in the casinos.

You can expect many more slots featuring mythical places to be released over time. The magic of these historical locations hold lots of secrets and intrigue which makes for a great slot theme. I will be writing about many more mythical place slots as this site grows as I am a big fan of this type of game. Any suggestions for ones that I have missed are welcome, simply email the site through the contact us page.