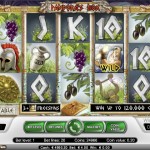 The Net Entertainment-developed Pandora’s Box is a slot title that follows a range of other slot games in adopting a theme from the mythological Greek age where Zeus and the Gods watched over all before them.

In Greek mythology it was told that Zeus gave Pandora, the first woman to exist, the box as a gift but was told not to open the box no matter what happens. Unfortunately for Earth, Pandora’s curiosity got the better of her and she opened the box unleashing all the bad into the world. She was left with one thing in the box and that was hope.

The Pandora’s Box slot game is a 5 reel, 20 pay-line that uses this story from Greek mythology to create a game playing experience that will pull players in that love games with an historical context and background story.

Symbols in the game include imagery associated with Greek mythology such as a Greek helmet, Greek shield, Greek lute, Pithos and grapes. The wild and special golden wild multiplier symbols are represented by Zeus and the scatter symbol is represented by Pandora herself.

When Zeus acts as the special golden wild multiplier symbol it will only appear on the middle reel and will substitute for all other symbols except for the Pandora scatter symbol to complete winning combinations. It will also multiply any winnings the player achieves by 4.

Zeus also acts as the regular wild symbol. This works in very much the same way that the special golden wild multiplier symbol works by substituting for all other symbols except for the Pandora scatter symbol to complete winning combinations. However, the only difference is that instead of quadrupling any wins the player achieves, this regular wild symbol will simply double any winnings the player achieves.

Net Entertainment have released a slot in Pandora’s Box that will compete and rival the finest slots out there that are based on Greek mythology. Players have a great chance to win big with the special golden wild multiplier symbols and the Free Spins Bonus Round. Players that enjoy IGT’s Treasures of Troy and the range of Greek mythology themed WMS Gaming slots such as Zeus and the excellent Kronos will love playing Pandora’s Box.