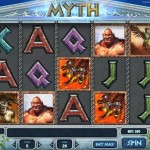 Myth is a Play ‘n’ Go developed slot game that comes with 5 reels and 20 pay-lines. The theme of the game resembles the sort of imagery one might see in Jason and the Argonauts or Clash of the Titans with all sorts of creatures from Greek mythology making an appearance.

Symbols in the game include such mythological beasts and characters from Greek legend including Cyclops, Cerberus, Icarus and the Minotaur. The wild symbol is represented by the Warrior symbol. This will substitute for all other symbols except for the scatter symbol to complete winning combinations. The scatter symbol is represented by the Golden Urn.

There is one bonus feature included in Myth. This is the Free Spins Bonus Round. The player can activate this bonus feature by hitting three or more Golden Urn scatter symbols anywhere across the reels. During this round, the player will be awarded with 15 free spins and any win that the player gains will be tripled.

Myth is another slot game in a long line of slot games that adopts a theme based on ancient Greek mythology. Play ‘n’ Go are more renowned for their mobile software and players will probably prefer to opt for a similar slot offering by the more established online casino software developers such as IGT or WMS Gaming.

Fans of IGT’s Treasures of Troy and WMS Gaming’s Zeus and Kronos might feel slightly underwhelmed when playing Myth due to its limited bonus feature and lack of expanding wilds.

Myth might translate better as a mobile slot game than as a land-based or online slot game but it might pick up a cult following because of its simplicity and theme alone. There are better slots out there though and if a player likes Myth then there are a number of other slots that will tickle their fondness as well.